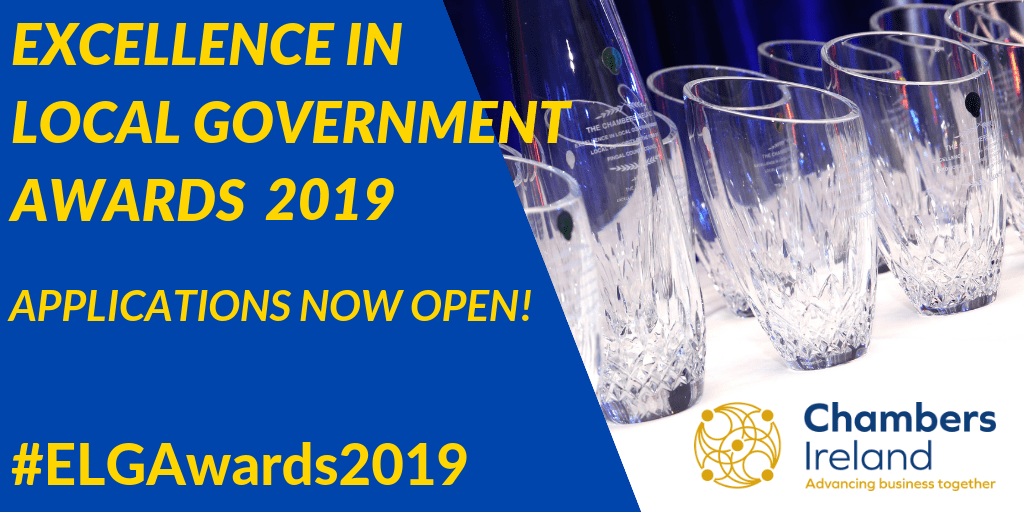 The Excellence in Local Government Awards are held annually in conjunction with the Department of Housing, Planning and Local Government and today’s launch invites Local Authorities to submit projects for consideration across sixteen different categories, in what will be the sixteenth edition of the awards.

In addition to the individual award categories, the prestigious Local Authority of the Year award will be announced at the awards ceremony in November.

In 2018, Clare County Council was named Local Authority of the Year.

Commenting on the announcement of the launch, Ian Talbot, Chief Executive of Chambers Ireland said,

These are key words which define the annual Excellence in Local Government Awards, which we are excited to launch today.

This sixteenth edition of the awards is a great opportunity for Local Authorities across the country to profile nationally the often extraordinary yet also vital, constant work that happens across local communities every day.

Today we once again invite Local Authorities to share their best initiatives with us so that they can be celebrated, highlighted and replicated.

We are also introducing a new category in the 2019 awards – the ‘Age Friendly’ award category. This reflects the efforts by every Local Authority to make Ireland a great place in which to grow old and we look forward to see the innovative applications which we expect to be brought forward in this area.”

The Excellence in Local Government Award winners will be announced at the 16th annual awards ceremony on 28th November at the Crowne Plaza Hotel, Northwood, Santry. Awards will be presented for excellence in sixteen different categories and one Local Authority will be awarded the overall award and named Local Authority of the Year 2019.

For further information on the awards, please visit the official Excellence in Local Government Awards page on the Chambers Ireland website, https://www.chambers.ie/events/elg-awards/